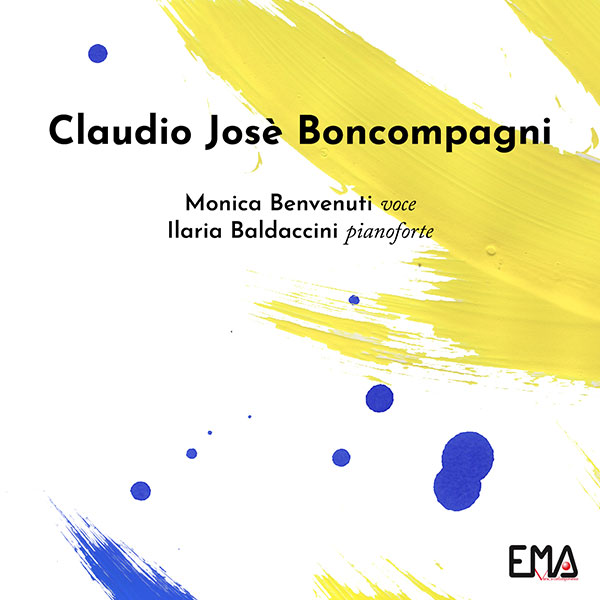 The project that Ilaria Baldaccini is carrying out, regarding composers who attended Florence’s Cherubini Conservatory and worked there between the end of the twentieth century and the beginning of this new century, is truly commendable. In particular, her constant commitment to keeping alive the music of the great and unfortunate musician Claudio Boncompagni must be stressed. Here Baldaccini is in partnership with the splendid voice of Monica Benvenuti.

Il monologo di Lucky (Lucky's monologue), which dates back to 2006, derives from Samuel Beckett's En attendant Godot (Waiting for Godot) and is for male or female voice and piano. From the beginning, Boncompagni was attracted to the theater, and his many incidental compositions demonstrate this. In this complex piece, the voice uses multiple possibilities of expression, from speech to modern vocal techniques, perfected by Berio in his Sequenza (Sequence) for Cathy Barberian (Boncompagni associated with Berio for a long time). The voice has an evident predominance and in the spoken moments it clarifies the text. However, the piano does not have the role of mere accompaniment; rather, it creates key points in the narration. The para-theatrical imprint is explicit. The two interpreters are very persuasive, not only good but convinced of what they do.

Geometrie II, for piano, is part of the cycle composed in distant 1986. These are two pieces that are rather difficult to perform, based, as the title says, on subtle symmetries. The second of the two is one of the first important pieces written by the young Boncompagni, who made a new version of this in 2012. This is the one proposed here, which maintains the expressive tension of the original, alternating dramatic moments with meditative ones, each laid out according to geometrical arrangements, a geometry that, however, does not make the sound abstract, but manages to produce deep emotional vibrations. The composition seems to have been considered outside the keyboard. With its games on the resonances, with its continuous returns, it seems to approach phrases conceived as if they were designed for wind instruments. The repercussive games also create a sense of spatialization. This is a piece that Baldaccini knows well, and only a long maturation could render it fluid and flowing.

Dei lunghi rumori fuggenti (Of the long fleeting noises) was composed in 2009, for female voice and piano, following the text by the beloved Dino Campana. It has a more sing-able modulation than the Monologo, although the voice continues to express itself in varying modalities. There are no noises, as the title might lead us to suppose. The word noises intends to refer to everyday routine: the noise of life that drags time along with it, until the final destination, to that destiny with which the poetry ends and which inevitably makes one think about the cruel fate that would soon thereafter drag Boncompagni to another world.

Estudio in lontanza (Study in absence), for piano, dates back to 2004. As the title says, it was conceived as a study, a characteristic which, however, is lost in Baldaccini’s performance, acquiring a fluid and highly expressive progression. The technical difficulties are evident, but after all Boncompagni's writing is never easy; what is important is to untangle it in a fluent unfolding. The initial chord opens the piece with a loud sonic gesture that is repeated, and from which the compositional path begins, very tense at the beginning and finally relaxed, creating two expressively counterpoised sections. In fact, the first section is fast, presenting dry and decisive sounds. The second part, on the other hand, has a nostalgic delicacy. Despite the technical and writing complexities, the music can be listened to with pleasure, thanks to the passion with which Ilaria Baldaccini confronts the score.

Claudio Boncompagni's life was an existential journey. The pieces proposed here attest to his restlessness and continuous seeking, not only for the technical-formal aspects, but also and above all for the vital ones, linked to existence, and to that existence that was too soon truncated. The very sensitive interpreters, Monica Benvenuti and Ilaria Baldaccini, merit applause for how they have managed to enter into that existence, touching its resounding heart.